Barry Smith has spent more than four decades breeding and rearing numerous group and feature race winners. The man from Mepunga East shares his expertise in an educational new video series about best practice breeding and rearing of greyhounds. Here’s an insight into his thoughts on… THE BASICS OF BREEDING
“I believe it’s a common sense approach. You only get out what you put into a greyhound, or anything in life for that matter. And I think that if you are going to start breeding you’ve got to have a well performed and well bred female greyhound and do everything right from when you start breeding right through to the pups’ racing lives.”

THE SACRIFICES
“For people that want to become a professional breeder there’s more in it than you think. They need to be aware and go and talk to other breeders, and I think you’ll find that most breeders would be more than willing to give you advice on how to start in the breeding game. You’ve got be prepared to put a lot of time in if you want to do it properly and you’ve got to be prepared to go without sleep when you’re whelping a greyhound down. You need to make sure you can look after your greyhounds to the best of your ability.”

THE WORKLOAD
“It is a massive amount of work. I’m semi-retired now but previous to that I was putting in 14 hours a day, seven days a week. That’s a combination of dairy farming and looking after our greyhounds. My greyhounds have come first with me for 46 years, but I couldn’t have done it without a lot of help and support from my wife, Andrea. We love the dogs. We treat them as best we can and in return they’ve looked after us.” 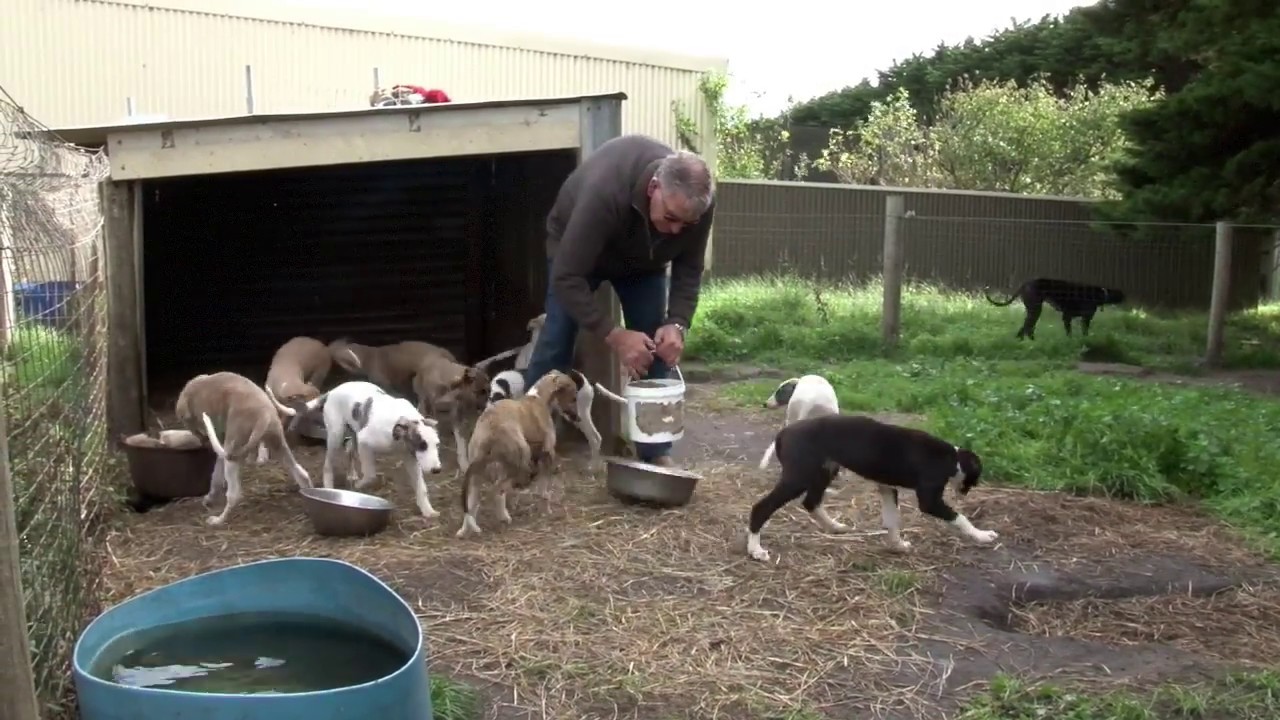 COSTS UP TO 12 MONTHS OF AGE
“The costs associated with breeding a litter would shock a lot of people by the time they get them to 12 months of age. If you breed a litter and you’re not lucky enough to sell some of the pups to cover your costs, by the time you rear those pups until they’re 12 months old it could cost you six, seven or eight thousand dollars – and that’s to rear them only. If you use a stud dog with, let’s say with a $3,000 stud fee, which is a comparable figure these days, if you get them implanted, that’s another cost, and if you’re unlucky enough that your dam has to have a caesarean that’s another expense, so the costs can blow out.”

COSTS AFTER 12 MONTHS OF AGE
“From 12 months of age you’re still up for costs because you have to bring the greyhounds into a kennel, and if you haven’t got a kennel yourself you’ll have to send your greyhound to someone to get it ready to break-in and get your greyhound half fit so as it won’t break down when it’s breaking in. Then you’re up for the cost of breaking in and that can vary between $100 and $130 a week for four weeks. Then it will have to go to a pre-trainer if you’re not a trainer yourself. I’m not sure what those charges are at the moment but it’s a pretty substantial cost and you won’t be looking at racing the dog until it’s at least 18-19 months old. So the cost of breeding and rearing a litter from the very beginning until they start racing is probably going to be in the vicinity of $25,000 to $30,000 if it’s a fair size litter. So if you plan to breed a litter it’s so important that you’re aware of the costs ahead of you.”

BREEDING AND REARING ON THE CHEAP
“It doesn’t work. You only get out what you put into anything in life – whether it be greyhounds, work or whatever. So short cuts are not on.” 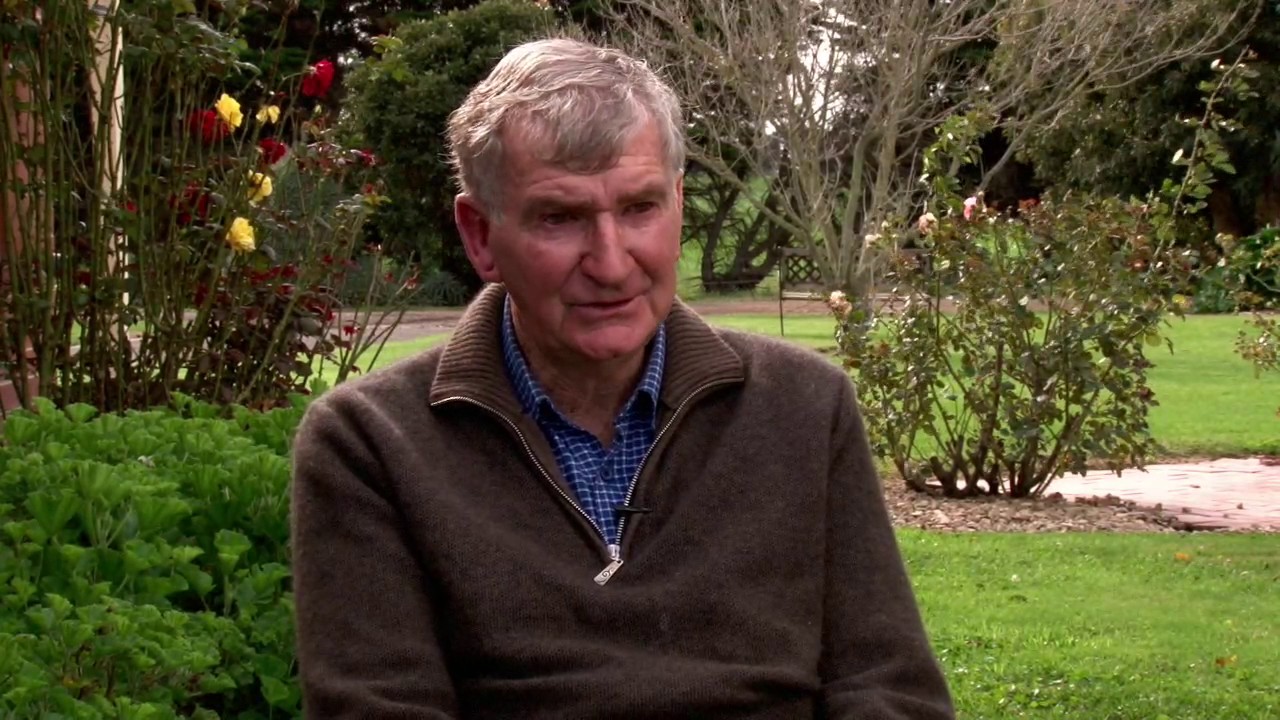 “Mepunga Diva has had six litters and she is now 10 years old and her age doesn’t make any difference in terms of her breeding potential. She still throws winners. But I do think it comes down to how well you look after the dam. You’ve definitely got to look after that greyhound. Treat her like you did when she was 12 months old. Feed her the same as a racing dog. Look after her. Just because she’s 10 years old, don’t discard her into a backyard somewhere and not look after her. Mepunga Diva has a shine on her coat like a 12 month old pup. You’ve got to look after them.”

FEEDING AND WORMING YOUR BROODMATRON

“We worm them out before they’re mated to make sure that they’re clean. During the nine weeks of pregnancy they are looked after and fed on meat, kibble and milk, wormed out again and then when the dam whelps we’ll go into real heavy feeding because she will probably eat three times as much as she would have eaten before she was mated. We feed her as much as she can eat to feed those little pups.”

FEEDING IN THE FIRST THREE WEEKS
“Pups will ideally drink plenty of breast milk from their dam right from the beginning, but if they are not latching on to the mother they’ll need assistance from someone in trying to latch on. If a pup is still struggling to drink from the breast then they can be bottle fed on Di-Vetelact, which is a prepared diet that comes in a powder form that you mix with water. Di-Vetelact helps pups grow and it also helps the mother feed them. If it’s a big litter we will supplement the pups with Di-Vetelact in the early stages because it’s very hard for the dam to provide a sufficient amount of breast milk for a lot of pups, and if the pups aren’t being fed enough they will lose a lot of weight which could be critical. It’s important to note that you can’t feed cow’s milk to pups in their first three to four weeks because it’s too strong for them and can scour them, causing them to dehydrate which could even kill them. It’s also really important to give the dam as much food and drink as she can consume in a 24 hour period in the early weeks.”

FEEDING FROM THREE WEEKS OF AGE
“At three to four weeks of age we start them a little bit of canned puppy food and puppy kibble soaked in Di-Vetelact so it has a mushy texture. After a few days of that we soak the food in a little less Di-Vetelact and introduce a little bit of milk. As the days go on they have a little more milk and a little less Di-Vetelact and after a week and a half we don’t give them any Di-Vetelact as their food is soaked only in milk. As time goes on they eat more and more which makes it easier on the mother, and she’ll ween them completely after about six weeks.”

FEEDING AFTER SIX WEEKS OF AGE
“At six weeks of age we continue with the canned food and soaked puppy kibble and we also start giving them raw bones to chew on to help their teeth come through quicker. When they get to three months they go on to dry food (kibble), meat, as many raw bones as they can chew on and as much milk as they can drink. Kibble is part of a balanced diet. You have to have a balanced diet in their ration. You could not just give them meat and milk because they won’t put weight on and they won’t grow properly.”

WORMING PUPS
“We worm them when they’re one week old and every two weeks after that up until they are three months of age. Once they reach three months we worm them once every month. That might sound like a lot but I just believe that a clean pup grows better and there’s no point feeding pups a whole lot of good nutrition if they’ve got worms.” 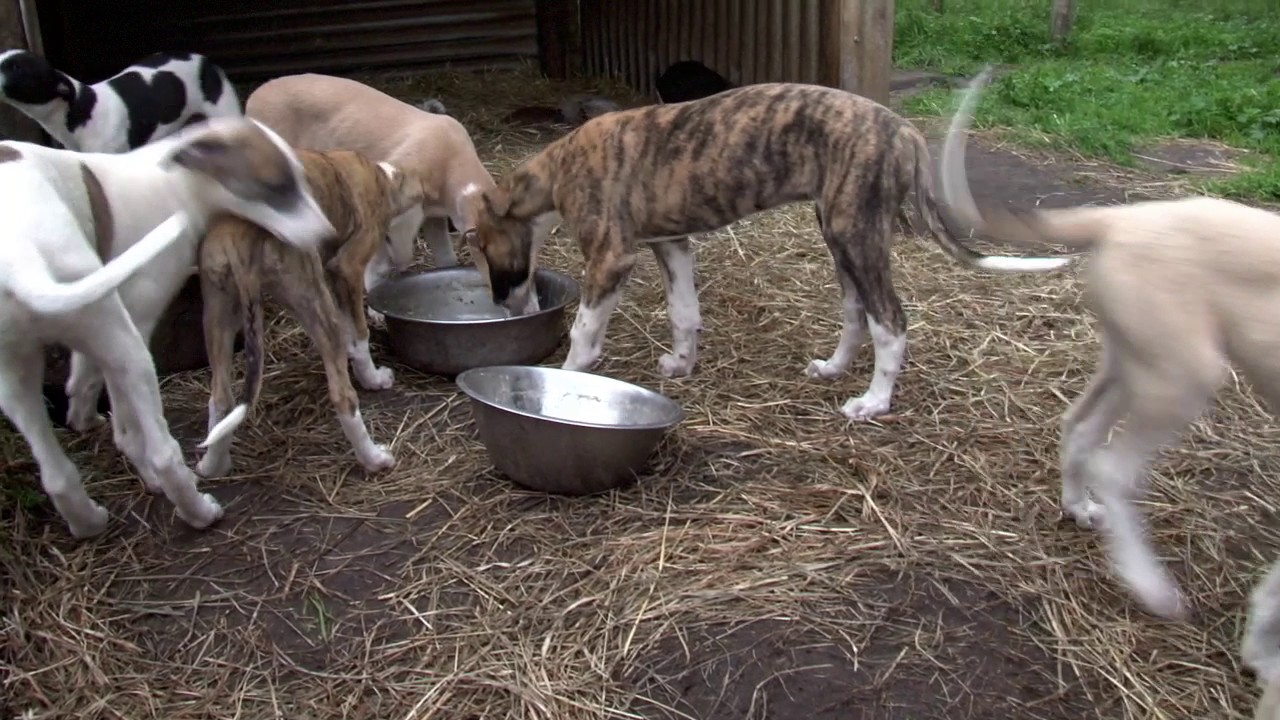 SOME OF THE BEST GREYHOUNDS BRED BY BARRY SMITH